We all know that your baby will not be brought by the stork will not bring your baby. However, its appearance as an anticipated member of your family starts much earlier and happens quite differently.

Fertilization occurs between the 30th and the 50th hour after you and your partner have made love. Mitosis is the cell division that results in two cells of equal size. They, in turn, divide again after the 50th hour to make 4 cells, and again after the 60th hour to make 8. Now we have the so-called morula, a ball that consists of 16 cells (it looks like a mulberry). The cell division continues, and over the next 3 days the morula increases continuously in size, while in the meantime it moves to the uterus.

Another term we should introduce for the next stage is the transformation of the morula into blastula. This happens when the smaller peripheral cells surround the larger central cells. They form the start of the embryo which you will call sweet names later on. The tiny sphere becomes hollow in the middle to form a fluid-filled cavity where the cellular sphere – the fetal bladder – is accommodated.

The embryonic bladder forms the fetus. At the same time, the external cells gradually develop its protective membrane. A part of this membrane will form the placenta that will connect you and the baby inseparably during the next 9 months. At this stage, the size of the blastocyst is only 250 thousandths of a millimeter!

The blastocyst reaches the uterus between the 4th and the 5th day after fertilization. There it floats freely until the bright membrane of the ovum disappears and the blastocyst attaches to the uterus mucosa at one of its ends.

On the seventh day after fertilization, the external cells of the blastocyst start to penetrate in the cellular epithelium of the uterus, thus starting the implantation that actually occurs during the second week after the fertilization. 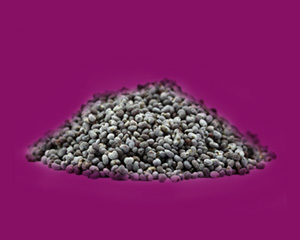 This week the baby is
as big as a poppy seed

You still do not know you are pregnant! You have no idea that in about 40 weeks you will hold a small creature in your warm arms that you will love more than anything in the world. But the surprise  you are about to experience will change you and will make you the best mom for your baby.